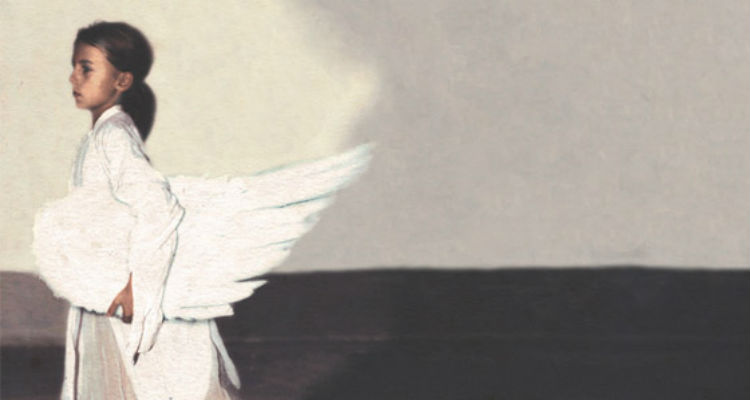 While snooping around near her grandfather's home, she sees her name scrawled in the dust on the surface of a table and soon meets her first and only friend, Titiola, whom Jess affectionately calls Tilly. Tilly is eerily fleeting in presence and tight-lipped about her family and home. When Jess' parents decide to move back to England, Tilly gives Jess her word that she will not be far behind. When the two girls are reunited in England, their friendship takes on a more preternatural hue.

Jess realizes that she is the only one who can see Tilly, and the creepiness of their connection culminates in a chilling vision of an infant. The meaning of the vision is initially a mystery to Jess, but turns out to hold the key to her troubled state of mind and her relationship to Tilly. Oyeyemi fluently incorporates Nigerian iconography and mythology into the plot and explains Jess' bizarre behavior which includes cutting out pictures of twins from schoolbooks as a meeting of the real and the surreal.


While the doppelganger theme runs the risk of being played out given its prevalence in so many timeless works of literature, Oyeyemi adds a new spin by relating this doubling to Nigerian custom and culture. She saw her mum's shoulders relax and wondered why she got so anxious about things like this. She'd heard her say lots of times, in lowered tones, that maybe it wasn't right for Jessamy to play by herself so much, that it wasn't right that she seemed to have nothing to say for herself. In Nigeria, her mother had said, children were always getting themselves into mischief, and surely that was better than sitting inside reading and staring into space all day.

But her father, who was English and insisted that things were different here, said it was more or less normal behaviour and that she'd grow out of it.

Jess didn't know who was right; she certainly didn't feel as if she was about to run off and get herself into mischief, and she wasn't sure whether she should hope to or not. Her mother held out a hand and grasping it, Jess reluctantly left her towel pillows and stepped out on to the landing. They stood there for a second, looking at each other, then her mother crouched and took Jessamy's face in her hands, examining her. Jess held still, tried to assume an expression that would satisfy whatever her mother was looking for, although she could not know what this was. Then her mum said quietly.

Then she said, "How would you like for us to go to Nigeria? You, me and Daddy! In an aeroplane! Would you like that? To Nigeria! She tried to imagine Nigeria, but couldn't. It would be hot. But if she had known the trouble it would cause, she would have shouted "No! Because it all STARTED in Nigeria, where it was hot, and, although she didn't realise this until much later, the way she felt might have been only a phase, and she might have got better if only oh, if only if only if ONLY, Mummy she hadn't gone.

Jess liked haiku. She thought they were incredible and really sort of terrible. She felt, when reading over the ones she'd written herself, as if she were being punched very hard, just once, with each haiku. One day, Jess spent six hours spread untidily across her bedroom floor, chin in hand, motionless except for the movement of her other hand going back and forth across the page. She was writing, crossing out, rewriting, fighting with words and punctuation to mould her sentiment into the perfect form.

She continued in the dark without getting up to switch on a light, but eventually she sank and sank until her head was on the paper and her neck was stretching slightly painfully so that she could watch her hand forming letters with the pencil.

About The Icarus Girl

She didn't sharpen the pencil, but switched to different colours instead, languidly patting her hand out in front of her to pick up a pencil that had rolled into her path. Her parents, looking in on her and seeing her with her cheek pressed against the floor, thought that she had fallen asleep, and her father tiptoed into the room to lift her into bed, only to be disconcerted by the gleam of her wide-open eyes over the top of her arm. She gave no resistance to his putting her into bed and tucking her in, but when her father checked on her again after three hours or so, he found that she had noiselessly relocated herself back on the floor, writing in the dark.

The haiku phase lasted a week before she fell ill with the same quietness that she had pursued her interest. When she got better, she realised she didn't like haiku anymore. In the departure lounge at the airport, Jess sat staring at her shoes and the way they sat quietly beside each other, occasionally clicking their heels together or putting right heel to left toe.

Did they do that by themselves? She tried to not think about clicking her heels together, then watched her feet to see if the heels clicked independently. They did. Then she realised that she had been thinking about it. When she looked about her, she noticed that everything was too quiet. Virtually no one was talking. Some of the people she looked at stared blankly back at her, and she quickly swivelled in her seat and turned her attention on to her father.

He was reading a broadsheet, chin in hand as his eyes, narrowed with concentration behind the spectacle lenses, scanned the page. He looked slightly awkward as he attempted to make room for the paper across his knees; his elbows created a dimple in the paper every time he adjusted his position. When he became aware of her gaze, he gave her a quick glance, smiled, nudged her, then returned to his reverie. On the bench opposite her sat an immense woman wearing the most fantastical traditional dress she had ever seen. Yellow snakes, coiled up like golden orange peel, sprang from the beaks of the vivid red birds with outstretched wings which soared across the royal blue background of the woman's clothing.

Jess called it eero ahty booby whenever she tried to imitate her mum's pronunciation of it.

The Icarus Girl by Helen Oyeyemi

Sometimes, when her mum was having some of her friends around, she would dress up in traditional costume, tying the thick cloth with riotous patterns around her head like a turban, looping it over her ears. She would put on the knee-length shirt with the embroidered scoop neck, and let Jess run her fingers over the beautiful stitching, often gold, silver or a tinselly green. Then her mum would run her fingers over the elaborate embroidery herself, and smile, turning her head from side to side as she regarded her reflection in the bedroom mirror.

Iro ati buba , she would say, lapsing from her English accent into the broad, almost lilting Yoruba one. This is iro ati buba. Then she would wrap the longest, widest sheet of dyed cloth around her waist, over the bottom half of the scoop-necked top, and fold it over once, twice, three times, her fingers moving across the material with the loving carelessness of one who could dress this way in the dark.

Her mum, standing smiling in the bedroom, her costume so bright it seemed to stretch the space between the walls. The thought made Jess smile as she sat waiting with everyone else, looking at this woman, who stared back at her, her small eyes squinting out from their folds of flesh, the fluorescent lighting giving her skin an odd, flat finish, as if the dark brown was catching light and not throwing it out again.

The Icarus Girl: A Novel (Unabridged)

Jess kept her eyes fixed on the woman, caught by her gaze, gradually growing frightened, as if somehow she could not look away or let this woman out of her sight. Would that be dangerous, to not look while being looked at? On the plane, Jess threw a tantrum. It was Nigeria. That was the problem. Nigeria felt ugly. It was looming out from across all the water and land that they had to cross in the aeroplane, reaching out for her with spindly arms made of dry, crackling grass like straw, wanting to pull her down against its beating heart, to the centre of the heat, so she would pop and crackle like marshmallow.

She had been reading about Nigeria for the past month, and her excitement had grown so much that she had nearly succumbed to that peculiar febrile illness of hers again, but recovered just in time for the yellow fever and hepatitis C injections that she needed. The anti-malaria tablets were disgusting, coating her tongue like thick, sickly chalk. It was the combination of the two white pills and the leering idea of her mother's country that made her begin to struggle and thrash, screaming, half dangling headfirst out of the seat, nearly choking on her seat belt, fighting off her mother's hands as she snaked herself away from the little chalk circles.

Inside her head, she could hear her skin blistering, could almost feel it, and she tried to outscream the sound. She could hear herself. She felt other people looking, heard people stirring, muttering, and felt good to be making this sharp, screeching, hurting noise.

Yet some part of her was sitting hunched up small, far away, thinking scared thoughts, surprised at what was happening, although this was not new. She panted as she shook off her father's restricting hands. Sweat was beading on her forehead and her eyelids, and she felt the prickly feeling at the back of her eyelids and that familiar sensation of her eyes almost involuntarily rolling upwards onto her head.

It was a kind of peace. Then her mother, who for a while now had been speaking in a pleading monotone, said something with a sharp buzz, something that she didn't quite catch, and slapped her hard. It was oddly like a cooling wind on her skin, the sting that remained when her mother's hand had left her, and she stopped struggling and hung limp from the side of her seat, her mouth a small, open O, until her father, murmuring reproachfully, settled her properly into the aeroplane seat.

He looked at her, dabbed at her cheek with his handkerchief. After a while the minutes sank into each other, and Jess sat still, her eyes following the two air hostesses up and down the aisles. Beside her, she felt her father's heavy, musky-smelling presence, the weight of his arm pressing along hers, heard his shallow breathing as he slept.

An air hostess whose name badge said "Karen" smiled quickly at Jessamy, and sleepy as she was, Jess somehow understood that this woman, her jaunty red cap perched atop a black bun of hair, was not smiling at her in particular, but at a child, at the idea of a child. Because she was an air hostess.


Smiling at a child. That was what she was supposed to do. Jess gave a drowsy smile in return. Jess fell asleep slowly, her hand reaching for her dad's. She closed her eyes completely, and the darkness was warm and quiet, like a bubble lifting her higher even than the aeroplane. Deftly blending the motifs of African folklore with an original new voice, Nigerian born Helen Oyeyemi tells a haunting story of twins and ghosts, of a little girl growing up between cultures and colors, to capture the mysterious power of myth to transform reality.

Powerfully imaginative and compelling, The Icarus Girl is perfect for you next reading group choice. Here are some questions to enhance your discussions: 1. 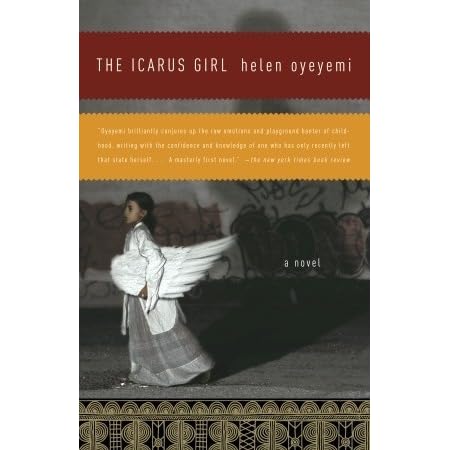 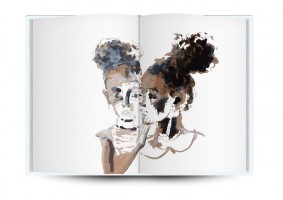 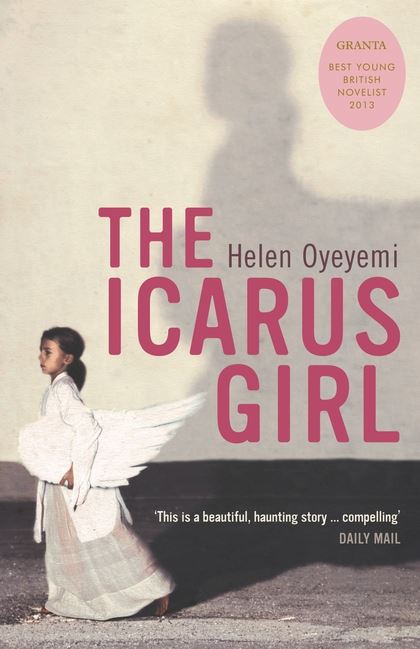 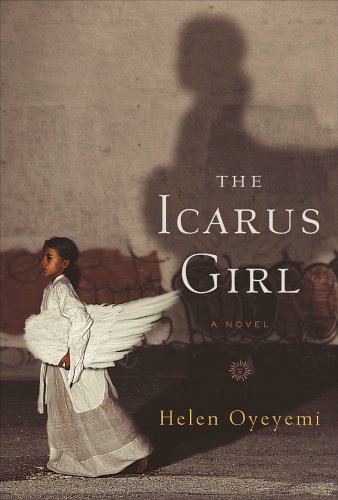